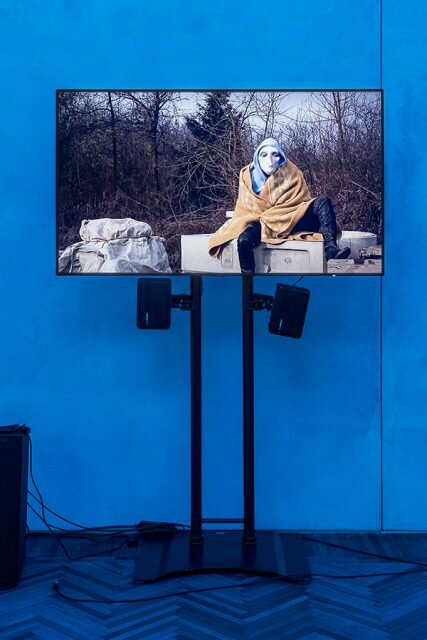 New video, performance and installation works by Beatrice Marchi have been produced for the group exhibition “Role Play” curated by Melissa Harris at Fondazione Prada - Osservatorio in Mllan.
__

“Role Play” is an exhibition curated by Melissa Harris that explores the notions of the search, projection and invention of possible alternative identities, hovering between authentic, idealized, and universal selves through a selection of photographic, video and performing works by 11 international image-based artists.

Playing with gender tropes, stereotypes, sense of place, and future perspectives, the artists who make up “Role Play” interrogate individuality as we know it and as it might be. Role-playing, creating alter-egos, and proliferation of selves are possible strategies for understanding each individual’s essence and persona.

“Role Play” features works by artists Meriem Bennani, Juno Calypso, Cao Fei, Mary Reid Kelley and Patrick Kelley, Beatrice Marchi, Darius Mikšys, Narcissister, Haruka Sakaguchi & Griselda San Martin, Tomoko Sawada, Bogosi Sekhukhuni, and Amalia Ulman in a light installation project, conceived by the creative agency Random Studio for the two exhibition floors of Osservatorio. As underlined by Melissa Harris, “Since the early twentieth century, projects engaging role-play have further contemplated identity, liberating artists to gender-bend and time-travel and envision their selves in myriad ways, in turn reflecting on their very is-ness—even when that is in flux. An alter ego, persona, or avatar may be aspirational; it may relate to one’s personal and cultural history and sense of otherness; it may be a form of activism, or a means of maneuvering through entrenched, even polarized positions, toward empathy: putting oneself in another’s shoes.”

Since its invention, one of the most suitable visual languages to investigate otherness is undoubtedly photography. Through different genres —portrait, self-portrait, reportage— and alternative approaches —from narrative to conceptual research— photography is the ideal medium for self-reflection, given its objective nature and thus its perceived authenticity. The evolution of photography, its transformation in filmic languages, the widespread diffusion of online social communities and virtual platforms, the future developments of the Metaverse and the subsequent emergence of digital avatars have intensified the urgency to explore self and others through role-playing, reinforcing our obsession with alternative selves.

“Role Play” will generate its own “alter-ego” at Prada Aoyama Tokyo in the form of another show including works by Juno Calypso, Beatrice Marchi, Haruka Sakaguchi and Griselda San Martin, Tomoko Sawada, and Bogosi Sekhukhuni. Prada will present this second exhibition in Tokyo from 11 March to 20 June 2022 with the support of Fondazione Prada.

The project is accompanied by an illustrated publication in the Quaderni series, published by Fondazione Prada, including an imagined text by Rrose Sélavy (Melissa Harris) and visual and written contributions by all the artists involved in “Role Play.”